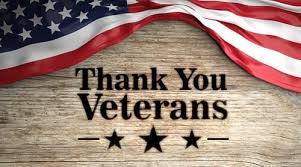 In honor of Veterans’ Day:  On a mission to save our children This week, following the election in the U.S. (which is some ways continues)…