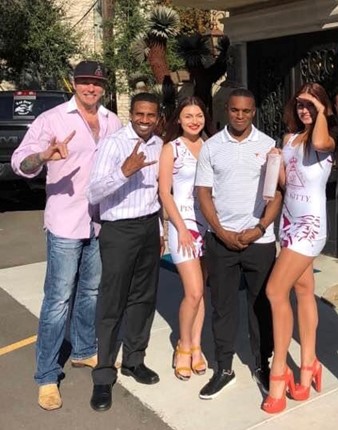 Robert Tushinsky, the son of Joseph Tushinsky and Rebecca Del Rio, was born on October 12, 1967. His father, Joseph, was a rich and famous man who introduced Sony to the United States in the late 1950s. His mother, Rebecca, was a Filipino actress who was the first Filipino to be awarded Asia’s Best Actress.

Robert’s brand drives large-scale positive transformation for endangered wildlife and the environment. A portion of their proceeds is donated to organizations like The Back Mambas Anti-Poaching Unit to give back to mother nature.

Robert is a passionately driven, innovative, high-performance, serial entrepreneur. He has successfully introduced multiple innovative products in different industries, from concept to brand acquisition. One of his achievements is that he was the first to introduce “fresh pack” pasta to all California, Nevada, and Arizona Ralph’s, Vons, Pace, and Price Club locations.

Robert has also won CNET/CES 2004 “Best Gadget” Award with innovative cellular accessory jewelry products. He has bounced around in multiple industries instead of sticking to a specific one. His interest lies in seeking solutions for the problems he thinks exist. Throughout his 40-year career, Robert has worked for various firms, including his father’s Sony/Superscope, Dell, Inc, and World Wide Technology, Inc. (WWT).

Robert’s spirit liqueur brand is the new generation of premium vodka with a lusty twist skyrocketing online direct-to-consumer. This innovative concept has sparked interest across the country, not just for its aphrodisiac properties but also for its delectable blend of natural herbs and organic extracts.

The innovative idea has never been seen before in the business. The spirits are available in two gender-specific flavors: “Pink Kitty” for women, with the motto “Passion, Intensity, Desire,” and “Easy Rhino” for men, with the slogan “Vigor, Vitality, Thunder.”

These liqueurs are all about getting couples together to have a great time; as their website states, “The possibilities of seduction are unlimited when EasyRhino/PinkKitty is involved.”

More from BusinessMore posts in Business »