Journey of Khalid Al Jaber; From an Engineer to a Motorcycle Traveler

Traveling across the world, that too on a motorbike – a challenge, indeed. All this just for the sake of a dream? 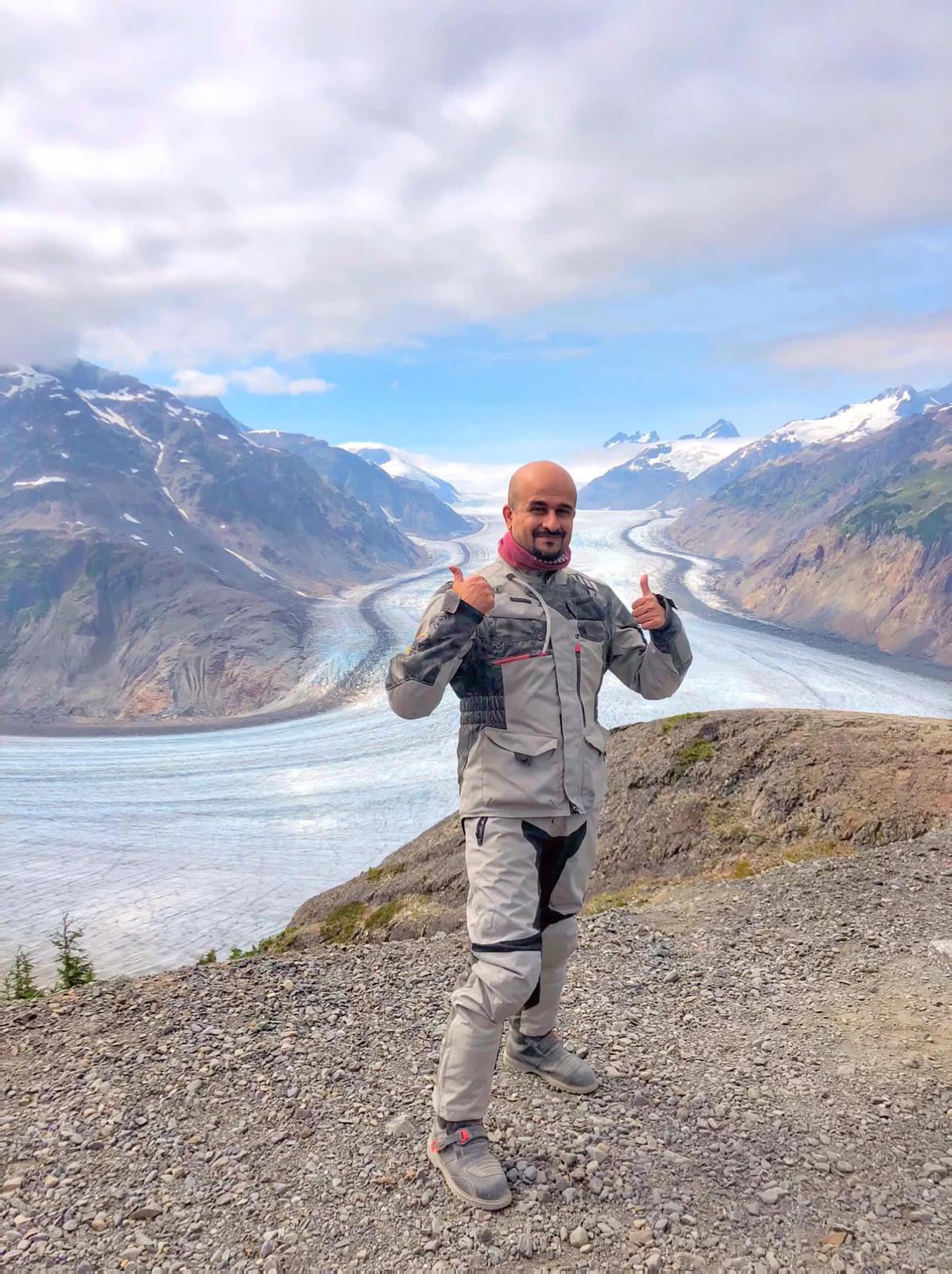 This is Khalid Al Jaber. Popularly known as ‘Sindbad,’ Khalid has established himself as an inspiration for all those who believe their dreams to be ‘unrealistic’ and ‘unachievable.’ Just like all other ‘dreamers,’ he also had to face challenges, and it took him a long while to achieve it. The only difference here is Khalid’s determination and passion. Despite the hurdles, this Qatari man did not give up. If it were not for his persistence and dedication towards traveling, he would not have been where he is today. Not only did he travel across 82 countries of the world but is also about to reach the moon, literally. He has been chosen as a crew candidate to the lunar orbital around the moon.

It is true, ‘life always finds a way.’ It does work in mysterious ways, but if one is passionate enough to do something, they will always land on their destination. With determination, passion, and persistence, an individual can conquer the world by building a life of their dream, just like Khalid Al Jaber. Even though the world is well-aware of Khalid’s adventures, not many people know his story. It is a story that is worth narrating. The world needs to hear it as it can serve as a major source of motivation for all those who have lost hope and have given up on their dreams.

Khalid Al Jaber is one of the few people who have traveled the world on a bike, but his story is what sets him apart. He was not just ‘lucky’ to have received an opportunity to turn his dream into reality. He worked for it and stayed firm on what he wanted to do.

A Journey Worth Narrating

Life does not always go as planned, but there is always a right time to set life in the desired direction. Khalid understood it and decided to play by the ‘rules.’ Being the younger brother of Hamad Al Jaber, a renowned Qatari surgeon and founder of PHI Clinics for Plastic Surgery with other family members all pursuing notable professions, it was difficult for the young Khalid to choose a ‘different’ field. Khalid Al Jaber was born on [DoB] in Qatar in a family of learned Islamic scholars. He wanted to keep up with his family’s reputation. This was something that was not infused into his mind by his parents or elder brother. It was his own belief and love for his family.

It was not easy because Khalid fell in love with motorsports and riding. He first rode a small quad bike when he was just eight years old. The thrill, adrenaline rush, and excitement made a home in his heart and mind. Triggering his passion was an experience in Geneva. At the age of 9, Khalid got a chance to ride on a motorcycle as a pillion while traveling in Switzerland. The young boy began dreaming. He calls this experience “the happiest moments of my life.” He grew fond of this activity.

As time passed, Khalid began prioritizing his education. During his time at school, he got the chance to ride a bike twice, once when he was 13 years old, and another opportunity knocked on his door four years later. These experiences kept his love for riding alive in his heart. He wanted to establish a successful career before he could build his dream life. His admiration for riding bikes made it difficult for him to focus on his career. He firmly believed in family values and loved his family dearly. Instead of being ‘rebellious’ towards his family, he decided to give himself time.

After graduating from [name of high school], he went to American International University in London to get a bachelor’s degree in computing and information systems. Despite his love for bikes, he kept studying. Regardless of his low academic performance, he kept working towards a stable career. He earned a bachelor’s degree and then acquired a master’s degree in innovative technology, computer crimes from the University of East London. Not only did Khalid study hard, but he spent more than a decade in information technology as a network engineer. While he was building a career, he did not feel inner satisfaction or joy. Without wasting any more time, he found it fitting to try his hand at what he always wanted to do. In 2010, Khalid stepped into the world of motorcycles and decided to become an adventure motorcyclist.

Khalid did enjoy riding and loved motorbikes, but he was also fascinated by adventures. This was why he never joined a biker’s club because he wanted to be an adventure motorcyclist. It marked the start of his journey, which he waited for throughout his life.

An Adventure Motorcyclist Living the Dream

Khalid Al Jaber traveled across Europe, the Middle East, and also in several Gulf Countries on his bike. It is his determination and passion that helped him travel to more than 80 countries across the world. His biking journey began when he met Kevin Sanders. He was with a group of adventure bikers that was traveling to [place]. He motivated Khalid every step of the way, and today he looks up to Kevin as his ‘teacher and idol.’ Chasing his dream, under the supervision of Kevin, holder of two Guinness world records, Khalid learned a lot. When he reached China, it was Kevin who brought the news of Khalid becoming a sensation in the world of adventure motorcyclists.

From the mountains of the Himalayas to the Silk Road and now to the moon as the crew candidate for the lunar orbital around the moon, the stories of Khalid’s traveling adventures are worth narrating. He has the support of his family and especially his elder brother, Hamad. His brother is proud of Khalid’s traveling achievements, “Moments of victory or achievement are a feeling unmatched by any others. You can achieve your dreams, but when the dream comes true, the people closest to you live the same joy and the same sense of achievement.”

Many people believe that life is too short of fulfilling their dreams and pursuing their passions. Khalid Al Jaber is providing otherwise. He believes in the theory of a ‘right time for everything.’ He spent decades working in an industry he did not like, but when it was time to take on his journey towards his dream, he grabbed the opportunity with both hands. It is important to understand that an individual has to ‘create’ an opportunity rather than wait for one to arrive at their doorstep. Khalid’s journey, from an engineer to an adventure motorcyclist who traveled across 82 countries, is, indeed, an inspiration for the world.