In today’s era, thinking about others’ good on a communal or national level is seldom witnessed. The lack of time, patience, resource, and efforts are factors that hinder one from working for a greater cause. Almost every person is driven by compassion to make their country the best among all, but the lack of these factors keeps them from doing so. Only true patriots keep their interests aside to think and work for the betterment of their country, and one of them Grand Duke Đào Minh Quân.

Before moving to the States, he served in the Vietnamese military. On April 30th, 1975, Southern Vietnam was forcefully occupied by the communist. This group of communists imprisoned the entire military force of Vietnam, including Grand Duke Đào Minh Quân. He stayed in the communist prison camps for more than three years.

In winter 1978, and commanded the ship VNKG-0602 carrying 524 people to cross the sea to Pulau Tengah, Malaysia. Soon after he escaped, he, along with his family, moved to the States.

Moving to a new country and living in a place that is free from restrictions motivated him to do something for the people of his country. Less than a month later, after moving to California, he joined the National Vietnamese Force in Santa Ana. He led the troupe, ‘Entertainment Struggle Group,’ which his compatriots lovingly called ‘Đoàn Văn Nghệ Áo Đen’ (Black Shirt Entertainment Troupe). His associations with independent activists enabled him to have a firm grip on his goal and continue working for it.

Grand Duke Đào Minh Quân is an individual with a high intellect. Despite having a full-time career in Information Technology and being the head of several IT companies, Đào did not lose focus from his primary goal. His multipotential nature can be measured by the fact that he submitted a draft named ‘National Citizens’ Resolution.’ He composed the draft in 1989 and submitted it to Philosopher Lương Kim Định, Chairman of the National Seniors’ Council. Impressed by Grand Duke Đào’s work, the professor signed a letter of authorization for him to be in charge of ‘Chairman of the Standing Committee of the National Council.’ Achieving small milestones like these kept Grand Duke Đào Minh Quân dedicated to his cause and made him work harder.

Another one of his achievements is his efforts to release the imprisoned soldiers and stuck Vietnamese in other countries. In 1989-1990 Grand Duke Đào Minh Quân and Mr. Nguyễn Hậu, President of the General Association of Communist Political Prisoners, established Political Prisoners files. These files helped ARVN soldiers, imprisoned by the communists, to reunite with their families in the United States through the H.O program (Humanitarian Operation). Grand Duke Đào Minh Quân also advocated sponsorship programs to help Vietnamese refugees settle in the United States through the program called C.P.A. (Comprehensive Plan of Action). At the same time, he contacted and mobilized in countries such as Kuwait, Vanuatu, Ukraine, Australia, and the European Union to help Vietnamese Communist Refugees in these countries.

To be persistent and endure patience to fight Communism, he moved the Permanent Office of the PNGVN led by his leadership to the Adelanto Desert. He moved on the land of forty acres bought out of his own money. There he began self-building places to worship the Five Deity Generals, Holy Shrines, and Monuments. He constructed these places to pay tribute to heroes and martyrs, the unknown soldiers who died for their country. He also remembered the souls of the Vietnamese people who wanted to escape the communist red devils but were tragically killed on the way across the sea.

Appreciation and Support for His Efforts 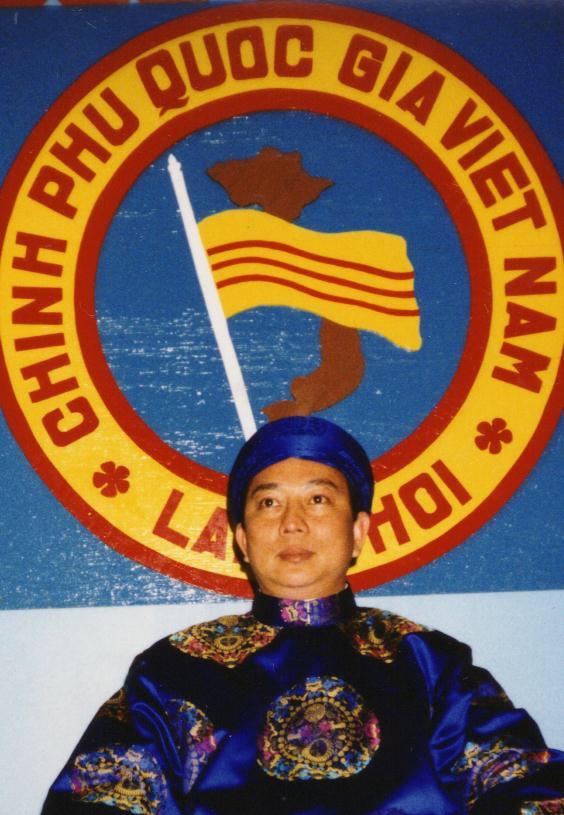 It is said that the path of the good is tough but is always fruitful in the end. Similar was the case with President Đào Minh Quân. Initially, he too faced difficulty changing the mindsets of the people, but as time passed, things became easier. People began comprehending his opinions and realized he his true cause – seeing the people of Vietnam happy.

He was supported by the President of the United States Allied Commission, Mr. Barry Thaxton. He also received 2 Diplomatic Notes from former President Bill Clinton inviting cooperation in building democracy, peace, and prosperity for the world with the promise of “time will fulfill.” The Provisional Government of Ukraine also invited Grand Duke President Đào Minh Quân to give a speech at the congress of the eleven countries of the (former) Soviet Union. His daughter, Tina Dao, at ten years old, delivered a speech on behalf of Grand Duke on August 23, 1991.

On July 5th, 2005, the U.S. Federal Congressman Gary Miller invited Grand Duke Đào Minh Quân to give a speech at the Republican Congress. He delivered the speech in front of politicians, delegates, and the congressmen of the United States. And very daringly mentioned his continued struggle to dissolve the Vietnamese Communist Party.

On October 15, 2010, Federal Representative Gary Miller and the US Former President’s Brother, Edward Nixon, honorably invited the Grand Duke Đào Minh Quân as Prime Minister of the Provisional National Government of Vietnam to claim sovereignty in the South China Sea at the Nixon Library. The cheering of the warm welcome of the entire audience, including high-ranking politicians, leaders, generals, tycoons of the United States and the world, motivated him to continue his cause.

Despite having a positive, clean, and angelic mission for Vietnam, Grand Duke Đào Minh Quân has time and again faced many media allegations. His political associations and organizations have been accused of causing disruption and disturbance in the country by the media. With every dawn came a new allegation and false news, but nothing deviated this determined individual from his cause. His focus and dedication to liberate Vietnam from chains of communisms and save it from becoming a communist hub like one of its neighboring countries have become more assertive.