Coach: A lesson in life and business forged on the soccer fields.

It’s a frigid Saturday spent on a soccer field, and this Florida girl is out of her element. Alex Laldin, however, is clearly in his. After a quick introduction, it’s all business for Laldin as he bounces from player to player, exchanging pleasantries and instructions.

When not working with some of Atlanta’s most well-known businesses or running his own, Laldin, 28, spends his weeknights and most weekends coaching competitive youth soccer for Southern Soccer Academy. Laldin is steadfast in his belief that organized sports prepare today’s youth to be tomorrow’s leaders. Here are four principles that guide both his soccer teams and his businesses. 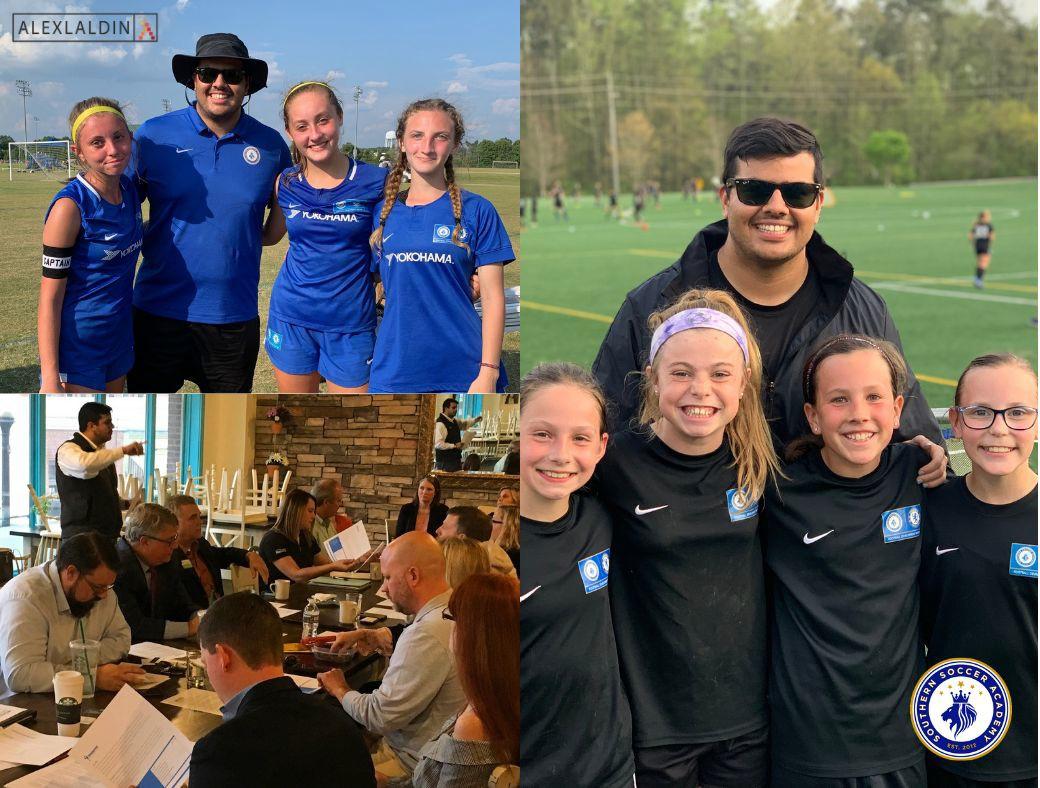 1. Clearly Define and Communicate Your Vision

Teams, whether on the soccer field or in the boardroom, at their core are the same: a group of people coming together to accomplish a common goal. As a leader, clearly defining and communicating your vision is vital. A clearly defined vision serves as a rallying point for your team, bringing individuals together and making them part of a greater whole. Stressful and difficult times are inevitable, like when your team who hasn’t lost in two years drops two games in one weekend. Being able to recenter and refocus your team’s energy on the greater vision allows you to keep moving forward as a team. Most importantly, clearly defining your vision allows you and your team to set short- and long-term goals together, then work towards those goals collectively. Failure to have a common vision can result in members focusing on individual goals or a team inadvertently working against each other.  Every coach/leader should be able to make a decision, no matter how difficult, with the assurance that the team will understand how it pushes them closer to the vision.

2. Understand Your Long-Term and Short-Term Goals

Whether coaching a soccer team or running a business, you must understand your long-term  and short-term goals.

When working with young athletes, it’s the coach’s job to prepare them for the next level, whether that’s competitive travel soccer, college soccer, or life off the field. Therefore, every decision made by their coach has to actively push them towards that goal, and sometimes that means sacrificing wins for the sake of development. However, no one wants to play on a team that loses every game, so we strive to balance long-term goals with short-term wins.

It’s very much the same in business, with a company balancing goals that are a year, five years, ten years down the road while keeping day-to-day operations running. One of the things I’ve learned the hard way is that sometimes taking a step back is actually best for driving the business forward. Firing a client, ending a service, terminating a staff member, even changing a business model—while these decisions may have negatively impacted the business temporarily,

they ultimately benefited the business long-term. Conversely, only focusing on immediate and short-term goals leads to tunnel vision; while everything seems to be working fine, years later you find yourself in the exact same position with no progression at all.

Embrace failure; the blueprint to success is often found amongst the rubble. Laldin believes that spending too much time and energy trying to avoid failure limits the potential for success. Whether it is the business owner afraid to make the step to the next level or the parent protecting their child from losing, people tend to make excuses for failure–the economy is bad, that location didn’t work, the referee cost us the game—rather than embracing the valuable information gained, allowing them to avoid that pitfall again.

While the team he’s coaching today is doing anything but failing, as they seemingly effortlessly dominate their opponent, Laldin says this performance proves his point. There is no growth or learning found in a team’s or business’s successes. Success is a byproduct of learning from past mistakes.

“The way they played today was an expectation. They won’t learn anything from today; this just shows how they have matured and grown since the summer when they lost a few games.”

Growth comes from failing, from losing, from picking up the pieces and heading back to the drawing board. Take a team that loses every game–of which Laldin has had a few–and within an environment of clearly defined values and goals, they’ll grow exponentially faster than a team who is accustomed to winning. If you find yourself or your team having too much success, you’re not taking enough chances.

It’s impossible to please everyone. Business owners/team leaders strive to maximize sales, impact, and opportunities; therefore, they are often afraid to say “no.” This mindset leads to a leader trying to be everything for everyone, a one-stop-shop. They rationalize this behavior to themselves because more customers, more clients, and more people served increases the impact. Right? Wrong.

Instead, leaders end up becoming so mediocre, so average, so bland that they don’t offer any value to anyone. They end up getting run ragged trying to wear multiple hats. In the moment, they may feel energized, busy, or even productive, but then they realize that all this effort still isn’t generating the desired results.

It has taken Laldin years to accept this fact, and the solution is still a work in progress. He used to reach out to any business owner with money and often found himself working with business owners whose values differed greatly from his own. He spent a great deal of time trying to accommodate one person who simply didn’t fit the mold and missed out on others who truly wanted assistance. Now, he stresses the importance of defining core values, refusing to compromise those principles of operation for anything or anyone.

It’s the same on the soccer fields. When coaching, Laldin works with his teams to define their goals, then refuses to deviate from that path. If a coach spends all his time trying to accommodate one player or parent, he’ll miss out on the seventeen others who are there to improve their skills. Although this mindset has resulted in conflict at times, the final product has always been positive.

Laldin’s greatest fear is that a player or a client will have a mediocre experience. He wants to inspire a visceral reaction. He wants to be remembered. He would much rather have a handful of people who dislike him than have hundreds of others who say “he’s okay” or “they do an alright job.”

Born and raised in Cartersville, GA, Laldin currently owns and operates Laldin Consulting, a marketing firm specializing in scaling service-based businesses and improving their sales processes. In addition, Laldin is also a Subway Restaurant Franchisee and partner in multiple service-based companies in and around Metro Atlanta.

Southern Soccer Academy is a 501-(c)(3) not-for-profit organization dedicated to providing soccer participation opportunities for 3-19 years-old boys and girls of all ability levels and backgrounds through participation in local and regional leagues and for adults in co-ed recreational leagues and pre-professional USL (men) and WPSL (women) programs. The club, in its various forms, has been in existence since 1982 and has locations in and around the

metro Atlanta area in Bartow, Coweta, Cobb, DeKalb, Fulton, and Paulding counties, as well as in the Brunswick, Jekyll Island, and Waycross areas in Southwest GA.