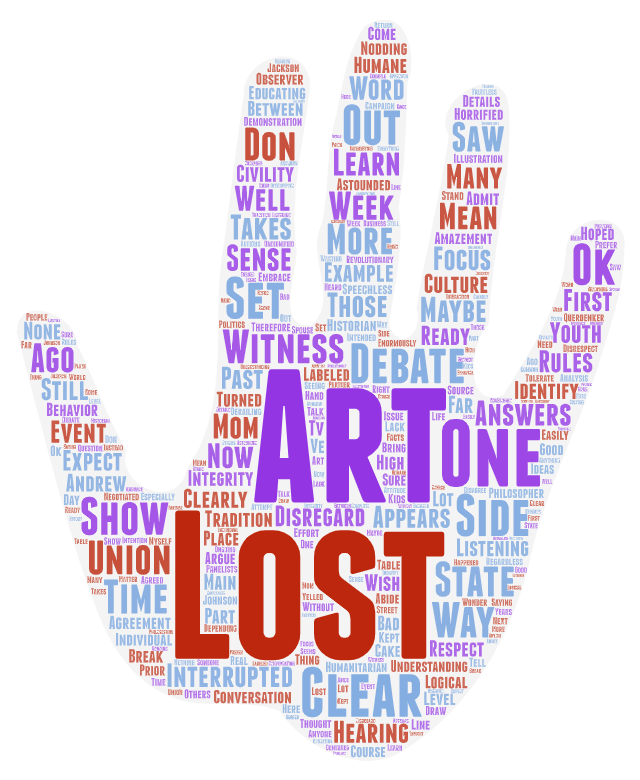 I am still astounded at what I witnessed about one week ago.  As a historian I am in amazement on what can clearly be identified as “the first”; as a mom I am horrified by the example set, as an individual and logical observer (maybe philosopher?) I am nodding with the sense of “that was to be expected” and as a humanitarian I am speechless.

What I witness this past week was labeled as a “debate” and turned out to be none of that.  That debate was a clear illustration and demonstration of the State of the Union in more ways than I wish to admit.   What I had hoped for was a focus on answers, details with those answers, a show of understanding for why this debate was taking place and its tradition.  What I saw was … a break with all traditions and rules.  Of course, I can argue that I am a Revolutionary (“Querdenker”) and therefore, maybe I should embrace what I witnessed.  Yet, the main part that I saw was an enormously high level of disrespect as far as I can identify it.

This event appeared to be more of what we have almost come to expect.  If I thought Andrew Jackson’s campaign got bad or Andrew Johnson’s or others … this one easily, without effort takes the cake – and I am not sure that is a good thing.

There was an agreement to abide to the rules prior to this event.  All sides were able to bring ideas to the table, all sided negotiated, and all sides agreed.  Yet, that agreement – “your word” – was not kept.  That to me is integrity.
There were between 128 and 145 interruptions by one of the panelists – depending on the source your prefer.  Those interruptions show a clear lack of listening and hearing, as well as an intended derailing of the issue at hand.  Regardless of where you stand on the politics, my question is:

Would you tolerate your kids, your spouse, your business partner, or anyone interrupting you in a conversation that many times?

In other words:  where do you draw the line of  saying “Don’t talk to me like that” and “I’m out of here” because I respect myself and this is undignified?

It was clearly fruitless to attempt to have a real conversation.  You may be ok with that.  I don’t like wasting my time with someone who has no intention on listening, hearing, learning or educating me with facts and understanding.  What is more, for me is that this is the State of The Union.  This is what our youth is seeing as “ok” – not just in this debate but on TV every day, in interaction between people on the street… and we tell them they cannot do that or wonder “what happened to our youth”?  Well, we set the example – with our actions and our behavior, our attitude and approach.

In my world: you can disagree with me on anything and everything.  I am ready to learn.  Yet, I am NOT ready to be interrupted, yelled at or demeaned.

Right now the State of the Union appears to be:

The LOST Art of Conversation – which has been ongoing.

The LOST Art of Listening

The LOST Art of Reasoning

The LOST Art of Learning and Educating

The LOST Art of Respect

The LOST Art of Humanity

The LOST Art of Civility

That…. Is interesting … for many years now we’ve heard that we need to focus on and return to Civility.  So all this means, to me: we are LOST in regards to ways and behaviors that were considered “common sense” and “humane” in previous times; instead it appears that the U.S. as a culture is engaged is a complete “ME” way of life, where no one else and nothing else seems to matter.

So, what is next to be lost?

Published in News, Opinion, Uncategorized, US, Wellness and World